by Maura McEvoy and Basha Burwell with Kathleen Hackett

"I would really rather feel bad in Maine than feel good anywhere else."- E.B. White

The big blue sign on the north end of the Piscataqua Bridge, which connects New Hampshire to New England's largest state, is as straightforward as the people who live there: "Welcome to Maine: The Way Life Should Be." Toss in its nickname, the Pine Tree State, its license-plate tag line, Vacationland, and the tourism board’s “Worth a Visit. Worth a Lifetime,” and one has to wonder if it’s all hyperbole.

But who could argue with E.B. White?

Or, for that matter, Jamie Wyeth, “There’s a quality of life in Maine which is singular and unique. I think. It’s absolutely a world unto itself.”

It is that world that The Maine House captures, in more than 400 photographs by acclaimed photographer Maura McEvoy, who has spent every summer of her life on the Maine coast; art directed by Basha Burwell, a Maine-born and raised descendant of schooner captains; and evocatively described by interiors journalist Kathleen Hackett, a native New Englander, who visited Maine every summer of her childhood and has spent the last 20 summers on the mid-coast with her own family.

Pulled straight, the Maine coastline, more jagged than the entirety of the Eastern seaboard, stretches for 3500 miles. For the last four years, McEvoy and Burwell have traveled its length, traversing dozens of fingers of land, ferrying across bays and reaches, braving dubious dirt roads, and strolling seaside towns in search of Wyeth’s singular world. It is the area that was first pursued by people from surrounding states and as far back as the late 1800s, when clergy and professors, with summers off, followed by wealthy families from New York and Boston, known as rusticators, sought to trade the chaos and congestion of city life for natural beauty and a slower pace.

The allure and love of Maine has only intensified.

"Whereas some might have opted to add a dormer to make for more headroom in the bedroom, the Piergrossis deferred to the Cape's original design."

From "An Antique Cape" chapter

The thickly settled southern coast has long been a draw for summer crowds looking for that ineffable Maine experience. And with that appeal comes inevitable change. Not unlike other beautiful locations around the country, the crowds are expanding north and west, forever seeking the “real” Maine while demanding the familiar comforts of home.

The more families “from away” flow into the state, the more Mainers have to adapt to their presence -- and the more they adapt, the more the “way life should be” falls away. Families who worked for generations on the ocean have been pushed off the coastline to make way for McMansions. Charming and quaint towns have been abandoned for strip malls. Clapboard and cedar shingles, the icons of Maine architecture, are replaced with aluminum siding. Driveways created from earth and pine needles are paved over with tar. Fences have gone up. 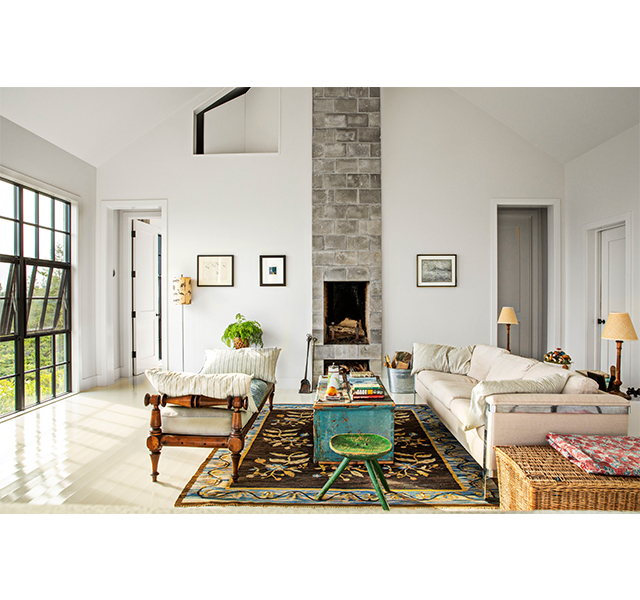 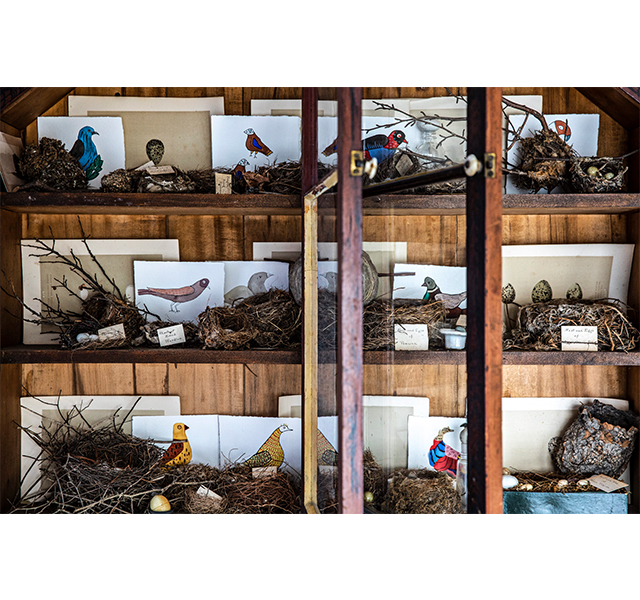 But it hasn’t all disappeared. The Maine House is a photographic record of and tribute to the place we all picture it to be, the one that plays out in a city-dweller’s fantasy, a child’s dream ( Robert McCloskey’s One Morning in Maine and Blueberries for Sal), an artist’s imagination (Edward Hopper, Alex Katz, Louise Nevelson, Katherine Bradford, John Marin, Fairfield Porter, Neil Welliver, Lois Dodd, Andrew and Jamie Wyeth, to name a few), a sailor’s aspirations (“I cannot not sail.” -EB White) and a nature-lover’s reverie.

"Though she deals in eighteenth-century American antiques, Kindig preferes to surround herself with the fruits of her travles. Southeast Asia, India, and Monoco are favorite destinations, as is evident throughout the bathhouse."

From "A Family Campground" chapter

"Nothing fancy here: Dodd sets the stage for her subjects using household objects."

From "An Artist's Retreat" chapter

"A ladder designed for picking apples leads to a loft space over the library."

From "A Mini Modernist Compound" chapter

"The narthex has become a stage, though the act of cooking and eating in the vast space can feel like performance in itself."

From "A Church" chapter

Here are the homes created by the people who live in them, distinctive for their ingenuity, originality, and fierce individuality. Here are the spaces that personify the artists whose work is made better through struggle, a Mainer’s point of pride. Here are cottages resolutely unchanged—where to silence a slamming screen door would be to strip the place of its soul. Here are the warped floorboards and lovingly worn camp sofas sat on by generations of the same family. Here are the spaces where a life well-lived is defined by spirit, creativity and longevity. Here is a kind of visual wealth that money just can’t buy. Here is The Maine House.